"Truth is not what you want it to be; it is what it is and you must bend to its power or live a lie" - Miyamoto Musashi

Now in Ebook format this seminal thriller, based on a true story is as relevant to showing the background and same usual suspects involved with the first major financial heist perpetrated on the world.

An investigative journailst uncovers the real dirty tricks, manipulations steering the world towards yet more control, divide and conquer. From the heart of the major Western powers an evil lurks that today controls, fuels and promotes chaos, wars and the enrichment for the Few.

Find out how one Outsider decided to call their bluff, uncover, dig deep into their roots and expose, at the peril of his life, a travesty

THE BOOK and BACKGROUND

TOTO, TESLA, WIZARD OF OZ - the links to uncover a travesty on humanity

FAMILY and HOW IT IS PART OF THE JOURNEY

PLAYERS in a TREASONOUS GAME - Churchill, Montagu Norman, The Fed, The Eight Families

Churchill with Toto:
"“Burnham talked of hidden hands, dark forces manipulating the actions we’re exposed to. Are these the ones you’re referring to?”
Churchill drained his glass, refilled it and offered the bottle to Toto who declined. His host placed the bottle close to him, on a round Georgian table, took another draught and answered.
“I’m not talking here of the national Jews, those whose like we accept and include in our society. Nor the Jews desiring a new home in Palestine.”
“​There is an international Jew, one so far removed from the historic one. These are the roots of the Bolsheviks.”
“Burnham refers to them as cuckoos,” Toto broke in.
“Damn fine description,” Churchill agreed slapping his knee in approval.
“When Balfour put the offer to Rothschild for the delivery of a promised Palestine to the Jews in his letter a decade or so ago are you suggesting he created a promissory note for a future home for Jewry?”
“Merely reward for persuading American intervention into the war, yes. Of course, my tenure as Colonial Secretary enabled my substantiation of that offer. In whatever way, I supported the gesture.”

Ludwig Landmann's, as first Jewish Mayor of Frankfurt, advice to investigator Toto:
““What you’ve not heard is there are elements behind the adulation who see me as the enemy, a hindrance to their plans. I wish the reputation I seek to be built on trust, transparency and integrity, qualities some loathe. My advice to you is, never take anyone for who they say they are, who they project to the world. In your book (The Dog, Man’s Best Friend) I read about the supernatural qualities you suggest dogs have and utilise. The senses so fine-tuned as to decipher between a threat and a friend. Hone these senses in yourself. Develop fine discrimination around everyone – and I mean everyone. That my dear Captain will be your strength, not your weakness.” 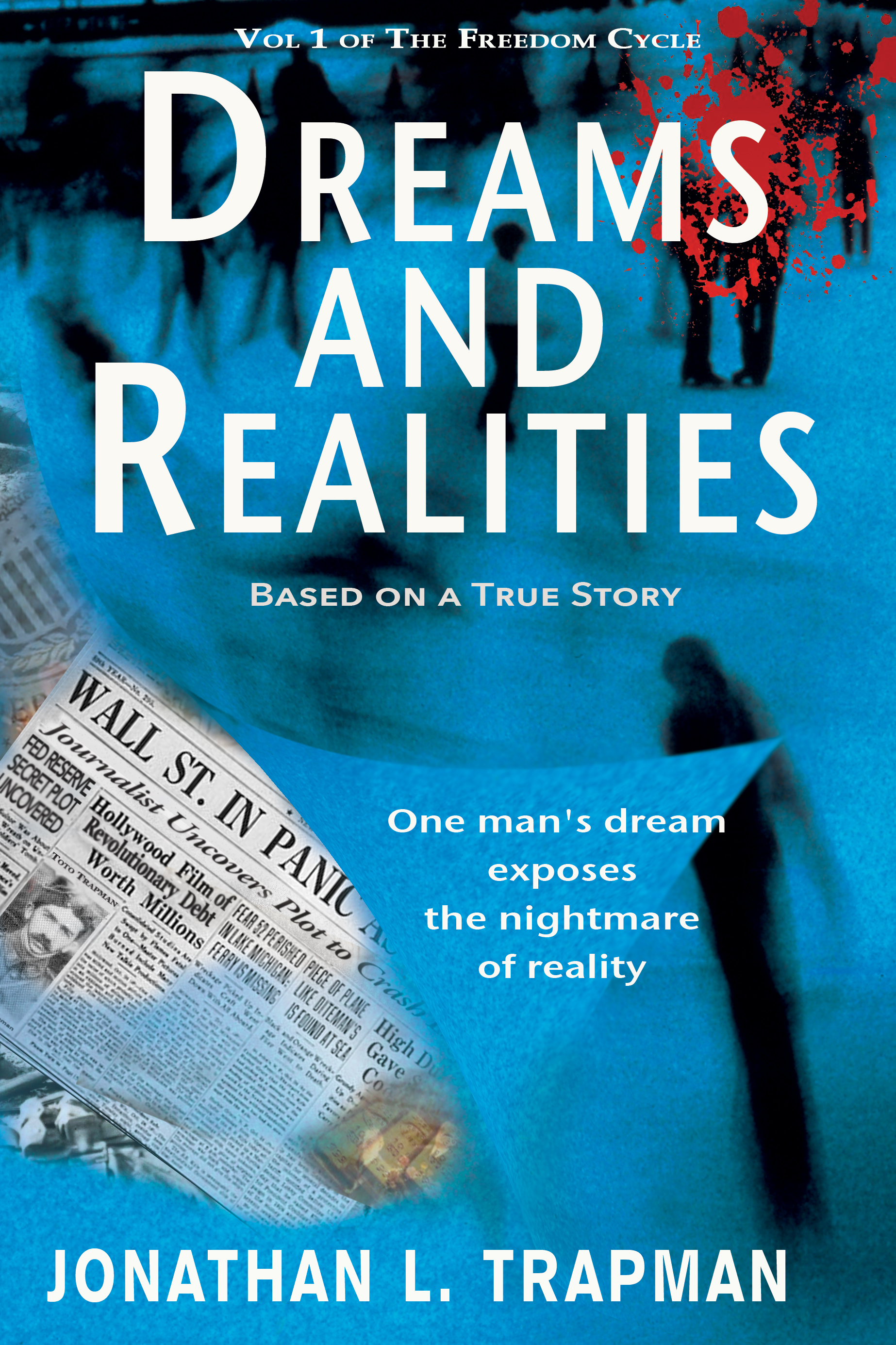 Thriller Based on a True Story

When an English investigative journalist in 1920s New York discovers a vast unpaid fortune owed his family for gold gifted to the Revolutionary cause he believes he's hit his very own Yellow Brick Road. What you uncover is not always what you get!

This based on a true story thriller exposé helps comprehend how dangerous today's modern twists and ramifications are and how they built into our society and consciousness.

The stunning Reality facing us today uncovered in the 1920s through a dream chasing riches....

Teaser for Dreams and Realities

Paving the way for Julian Assange, Wikileaks, Edward Snowden, Chelsea Manning, John Kiriacou, Dr David Kelly and so many others  - Capt AH 'Toto' Trapman exposed and brought to the world the malfeasance, treachery and downright criminality of  a world dominating elite that included politicians, bankers, arrant corporate criminals and putrid plutocracy hell bent on initiating a process and world we suffer today as they crashed the economy and
life of many millions through The Crash of 1929.

These same criminals not only engineered the start and outcome of
WW1 but were ploughing and seeding minds and terrorities for WW2 and beyond.
Today we still fight and must resist the final tying of knots towards a totalitarian, evil and life threatening control of our lives and freedoms
THIS IS SERIOUS AND AFFECTS US ALL WHETHER WE ARE AWARE OF IT OR NOT

Assange Represents All Our Freedoms

The Great British Mortgage Swindle
Trans. from French - MORTGAGE - Death Pledge!
In Britain, the mortgage market is worth more than £1.3 trillion, but how many of these mortgages are fatally flawed through the complicity of legal professionals? This is no tale of wishful thinking, people powered by airy fairy desires to stop being fleeced. This is the real story of how we all can finally get justice, recompence and real good law from the ashes of a criminally driven system.

READ HOW TO RECLAIM YOUR MORTGAGE+PAYMENTS

Today's Fake News, Conspiracies and Global Hegemony seeded, grew and opened its Dystopian Dynasties in the Crash of '29!

The Freedom Cycle is a progressive journey starting with the author's true life great uncle, also a journalist at the time of the Great Depression whose discoveries open a hornet's nest of secrets, plans and agendas for global rule.

An English journalist in 1928, in Dreams and Realities, the first volume in a seven book epic journey, uncovers much of what whistleblowers like Assange, Snowden, Manning and Kiriakou reveal and show us today and like his present day counterparts gets targeted as Public Enemy No.1

It's an old and dangerous game revealing truth against lies and propaganda.

In Angel of Redemption we follow the happenings creating the USA, its founders  and how uncoverings from the 1930s impact a near present day realities and their outcomes.
Inheritance of Cain takes the action and journey into territory birthing from exposure as
Tree of Life follows the complex, intertwined destinies of generations interconnected geneologically across time and space. It reveals their connected responsibility towards the outcomes they create for humankind.

Become a Character
in the Book - Angel of Redemption!

"Become the change you want to see happen"

This old adage can really take form for you by placing yourself into the thrilling storyline as a character with your name or fave sobriquet/avatar.

Find out this novel and exciting way you can work with the author and others to be part of a best seller that could determine real changew in the world. Draw on your pioneer spirit, that inner renegade, crusader for truth, revolutionary for change!

Vortex of the Veil breaks the barriers of mind, body, space and time revealing a far larger canvas of destiny, as the battle between good and evil, right and wrong weave their incessant interplay on pathways forward.

Mind of God, the penultimate volume takes us on a mind bending, questing journey as to what, where and who controls what is perceived and unsderstood as truth, freedom and life itself. The characters within this monumental mystery tour can only unravel what each search for and all might demand when faced with annihilation.

The final volume, The Freedom Factor confronts the journey home :
".. coming home is a journey of becoming, where the traveller journeys through landscapes of myriad mind inviting the breaking of bonds that bind..."
or is this just the beginning?

Hopefully daily but most certainly regularly the audio blog brings reflections thoughts and audio snapshots of events as they happen and how they may or may not reflect what has gone before. Hopefully listeners will gain an insight or two, some inspiration and more importantly hope, determination and clarity towards a better future for us all
Listen to the latest episode

Read More and Download FREE First Chapters Toto's Outsiders Blog
"Dreams and Realities presents a world of power that often portrays culture and refinement as the perfect disguise for corruption, deceit, and underhanded viciousness. And the books tragic hero, Toto, sees behind the curtain and pays the price - a price that all of us are paying in one way or another to this day."
Robert Sachs
Author of The Ecology of Oneness

“When treading murky waters where power resides it becomes a maze of contradictions and  swamp of  foul insights. The journey a hardened war corresponden, former military man and intelligence agent takes will test everything he ever experienced in the trenches of  WW1 built on lies and prosecuted for an elite's benefit."

The Freedom Cycle is a heptalogy (seven) book series tracing the journey of an idea, sponsored, projected and interpreted by individual heroes. Individuals and groups deciding the experience of the journey to Freedom, meeting, challenging blocks and usurping Powers along the Way to be the most fulfilling way to become.

The cycle always depends on individual action to stir the soup of creation, ever exercising itself. It relies upon self and selfless service in accordance with Original Plan. With divergence comes a flood of will stirring still pools of aspiration, delivering raging rivers of power into oceans of desire.

Such times call heroes to account, to meet the flow, challenge and be challenged to awaken and answer the inter-dimensional call of destiny.

In the beginning was the Word and the Word got stolen requiring heroes to find it
An Epic Seven Volume Journey through time space and evolution.
Time, space and who we are is a cocktail of faith, hope and someone else's word. When Heresy breaks the chains of this unholy Trinity, all bets are off....

When an English investigative journalist in 1920s New York discovers a vast unpaid fortune owed his family for gold gifted to the Revolutionary cause he believes he's hit his very own Yellow Brick Road.
Far from leading him to riches it uncovers dark secrets and nightmare scenarios impacting the world. Will he decide there are bigger fish to trap and truths to expose?
Does he become the fish or fisherman?
Will his findings ignite the spark for another revolution or are the forces ranged against him too powerful to reel in?
read more

A visitation from an angel foretells the outcomes of a newly birthed state of freedom. Across the centuries the third and ultimate outcome plays itself out. A fully corrupted Empire of Control, eager to complete its plans, is challenged by the fully awakened Outsiders. Will the Angel of Redemption be called upon to visit once more?
read more

Millennia of control through manipulation of spiritual realities, reveal the true face of evil. Its resurgence in an horrific and terrifying modern form challenges the very nature of what is considered to be human. Is there still time for the hero to intervene against this inheritance?
read more

If the sum of who we are is charted in individual genealogy, then these stories become a map guiding us towards an ever growing Tree of Life and illumination of true purpose. If the future is written in our genes how then can we write that into the stars?
read more

Vortex of The Veil

Beyond the Veil it is time for evolution to take center stage and become! A call goes out for heroes. Will it be heard?
read more

is a mystery unfolding...

In the beginning was the Word.....
and before the Word there was a magnificent pulse, a vibration stirring cosmic soup into existence.
It was uncertain whether it was just before or just after that union of divine thought that a pause was felt.
read more

If the sum of who we are is charted in individual genealogy, then these stories become a map guiding us towards an ever growing Tree of Life and illumination of true purpose. If the future is written in our genes how then can we write that into the stars?
read more

The Power of Lies and Truth and other stories